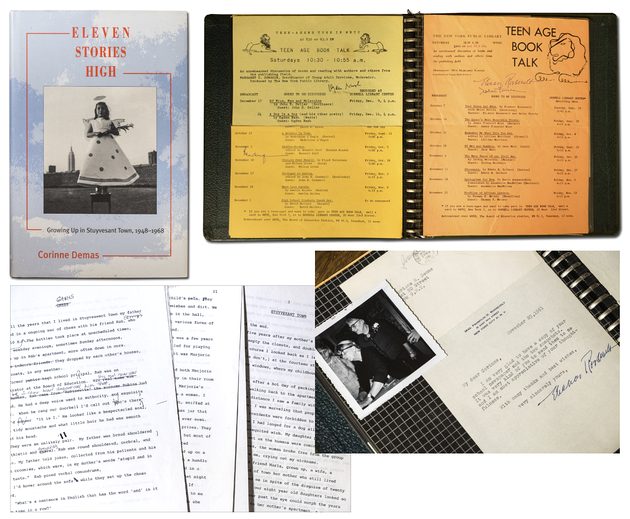 This book is particularly concerned with the changing roles and expectations of women between my mother's generation and mine. - the author

A small archive (three boxes) of a book that documents two American decades in one of New York City's signature neighborhoods: Stuyvesant Town.

Corinne Demas is a novelist and author of young adult books who grew up in Stuyvesant Town as one of the first generation to live in the development, which opened in 1947. In 2000, Demas published a memoir of her childhood and adolescence entitled "Eleven Stories High: Growing Up in Stuyvesant Town, 1948-1968." SUNY Press issued the book, and this archive chronicles its creation and publication and the response it engendered, as well as the issues surrounding Stuyvesant Town.

Stuyvesant Town was conceived as a carefully planned postwar middle class neighborhood in central Manhattan. Prospective tenants were closely screened and their income verified. The number of applicants for the 11,000 apartments comprising Stuyvesant Town, and the slightly more upscale Peter Cooper Village, totaled more than 100,000. ST-PCV was an experiment in urban planning – a gated community in the heart of the city, privately owned, with private roads, and a private security force – and also an experiment in social engineering: blacks were excluded in its early years and the income requirements kept out the poor. The apartment buildings clustered around a central oval with a fountain; traffic was limited; there were no schools or shops. The development was designed to be a safe haven from the rest of the city, and in that it eventually succeeded: by the 1980s it was deemed the safest neighborhood in New York City.

Many of the early residents were young families, often from working class backgrounds, many of them immigrants or the children of immigrants. Stuyvesant Town represented a step up the social ladder, into the middle class, with higher incomes, better education for the children, less onerous working conditions for the fathers, and mothers who could stay at home as housewives. Much of what we still associate with the term "middle class" was established, defined, and nurtured in the early postwar years in Stuyvesant Town, as was a significant portion of what we call "the American Dream" – the belief that one's children's future should be brighter than their parents', their education greater, their opportunities more, and that this should continue indefinitely.

Eleven Stories High is a memoir of my middle class New York childhood, and the particular perceptions of a girl growing up in a housing project where the apartments and buildings are identical and you're prohibited from walking on the grass. It is an exploration of the concept of "home," how a place like Stuyvesant Town—impersonal, symmetrical, utilitarian—shapes a childhood. Eleven Stories High is organized by subject (rather than chronology), and examines aspects of my life in Stuyvesant Town from the time I was a toddler till I was a teenager at all-girls Hunter High School. I talk about elevators, telephones, subways, and parakeets.

Chapter topics include Hunter Elementary School and the education of the supposedly "intellectually gifted child," being a Gentile in a Jewish world, the secret community of Greeks in America, and the contrast between "the country" (Mt. Kisco, New York) and the vast sterility of Stuyvesant Town where an earthworm was an exotic, a butterfly a miracle.

I write about my grandfather (who was head of the Dead Letter Department for the U.S. Post Office in New York), my father (an unconventional dentist) and his encounters with armed robbers, and my mother, who performed all the tasks of a traditional Fifties housewife in addition to being a biology teacher at Stuyvesant High School (where she taught the boys I met at school dances everything they knew about reproduction).

This book is particularly concerned with the changing roles and expectations of women between my mother's generation and mine.

This archive contains Demas' scrapbook of her school years (featuring a note signed by Eleanor Roosevelt); multiple manuscript drafts of the memoir (both hard copies and digital copies); and publication material and related correspondence (with two publishers). In addition: when Eleven Stories High was published, Demas became an inadvertent spokesperson for Stuyvesant Town, and her comments on various ST-related matters – having to do with real estate values in the late 1990s and early 2000s, the gentrification of ST-PCV, the decline of the middle class, and the contrast with the values instilled by her upbringing in this "accidental utopia," as she called it – appeared in the New York Times as an article, an op-ed piece, and a letter to the editor. The archive contains her writings for the Times on these subjects as well as a sizable amount of the correspondence it generated. Moreover, the book itself generated several large files of correspondence: included here are hundreds of pages of readers sharing their responses to the book and their own recollections of Stuyvesant Town. The book is a memoir but the archive is, in effect, a social history.

Little else has been written about Stuyvesant Town. The 2013 book Other People's Money by Charles Bagli focused on Stuyvesant Town and Peter Cooper Village as the center of the greatest real estate deal ever made – and, at the height of the Great Recession, ever to fail. But little has been written about the community itself, which helped give rise to the idea of gated communities around the country, helped to define what it meant to be in the middle class at that time, especially in an urban area, and embodied so many elements of both the positive and negative aspects of "the American Dream." Demas' memoir touches on issues of class, race, religion and gender.