Introduction to our Third Catalog of Native American Literature

A poet and novelist of Blackfoot-Gros Ventre heritage, Welch was one of the most important and accomplished Native American writers of the post-1968 generation. His first three books were published in the Harper and Row Native American Publishing Program and his third novel, Fools Crow, won the Los Angeles Times Award for Fiction for 1986. His book, Killing Custer, was a nonfiction treatment of the Battle of the Little Bighorn as viewed from the Indian perspective. 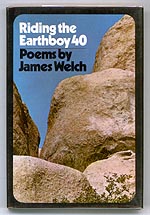 My first published poem was in a small, badly-xeroxed, stapled-together journal that came out of an unlikely place called Piggott, Arkansas. I forget the name of the journal, but it was a very grand name--something like "The American Journal of Literature" or "The International Compendium of Poetry." Each issue, I was told, was devoted to poets from different regions of the country (and possibly, the world). The issue I was in was subtitled something like Twenty Poets of Montana. Or Ten Poets of Montana. We Montana poets were all in the creative writing program at the University of Montana and it was a very small program in 1966. We only had one poetry teacher then, but he was a good one: Richard Hugo. He was from Seattle, had survived World War Two, had been a student of Theodore Roethke, had worked for Boeing as a tech writer for thirteen years and was one of the most respected poets in the country. In spite of his credentials, even then, this was his first teaching job and he was as insecure as we were.

My first poetry class from Hugo was a graduate-level seminar. Most of the other dozen students were older, some were married, some had had careers, others were at loose ends. I was one of the latter. After an undistinguished career as an undergraduate, I was accepted into graduate school (on probation) simply because I was a warm body and the fledgling program needed bodies to fill chairs. 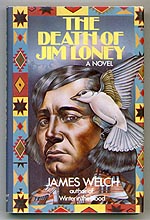 It didn't take me long to realize that I was in way over my head. I discovered I didn't know how to write the kinds of poems my classmates wrote. Up to then, my poems had rhymed and were filled with majestic mountains and wheeling gulls. I didn't know the poets they referred to. When Hugo, to provide an example, asked me to look up a poem by Yeats, I wrote "Look up Yates" in my notebook.

Finally, out of desperation, Hugo called me into his office and told me to close the door. He told me to sit down, and I knew and dreaded what was coming. "You don't know anything about poems, do you?" I sat for a moment trying to think up a defense for my sorry attempts in class, but nothing came to me, so I said, "No." To my surprise, Hugo said, "That's okay. What do you know about?" When I couldn't answer that question, he said, "Where did you grow up?" I could at least answer that and did. I was born on the Blackfeet Reservation, my father's country, and I lived there and later lived on the Fort Belknap Reservation, my mother's home. Both reservations are in northern Montana, on the Hi-line, just south of the Canadian border. Both are quite isolated. I've heard both described countless times as being "bleak," even "hopeless." But to a kid growing up, they weren't bad at all. You had friends, your parents loved you, you loved your culture, you rode horses, you put up hay, you fished and hunted. It was only later, after you had been told that your culture was dying and that you had grown up in a depressed, "bleak" place, that you came to believe that life on a reservation was not what you thought it was.

Hugo, in his infinite wisdom and generosity, said, "Go ahead, write about the reservation, the landscape, the people." At the moment I thought that was a fine idea, but as I walked home that day, I became more depressed with each block. I knew that nobody wanted to read about Indians, reservations, or those rolling endless plains that turned into Canada just thirty miles north. By the time I got home, I began to think that maybe that country was bleak and that life on the reservation was hopeless. 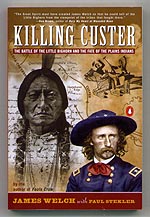 Nevertheless, I began to write poems about the country and the people I came from. Apparently some folks were interested in my subject matter, as I began to publish poems in small magazines and even a couple of large ones. A few years later, my first book editor and I were going over the manuscript of Riding the Earthboy 40, and he asked me, "Why are you so obsessed with bones and wind?" It seemed a strange question, but when he started to point out the many references to bones and wind, I realized that I was writing about a country I knew deep down, without thinking about making choices, or selecting the right metaphor. I was writing about a world I was born into, a world full of bones and wind -- the world of my ancestors. And thirty years later, in one way or another, I am still writing about that world.

Happily, I was wrong in thinking that nobody would want to read books written by American Indians about American Indians and their reservations and landscapes. But I may have been justified in my skepticism. As far as I knew back then, there were no Indian writers. Scott Momaday's ground-breaking House Made of Dawn had not yet been published. D'Arcy McNickle's surprisingly contemporary novel, The Surrounded, was out of print. Writers like Paula Gunn Allen, Simon Ortiz, Leslie Silko, Joy Harjo, Gerald Vizenor, and Ray Young Bear were probably just beginning to think of writing careers. In other words, there was no "Native American Renaissance" in literature then. We were all pretty much on our own in various parts of the country. Now you can't shake a tree without two or three Indian writers falling out.

And the best part of this renaissance is that these writers are good. Some are well-known to the literary public: Louise Erdrich, Sherman Alexie and Linda Hogan come to mind. Others, such as Diane Glancy, Roberta Hill Whiteman, Elizabeth Woody and Greg Sarris, are very much respected within the Indian community. They are writing about vital subjects with an energy and vitality that comes with a youthful literature that is based on the oldest tradition of mankind--storytelling. They are taking that literature several steps forward by telling their own stories through poems, short stories, novels, memoirs.